So I activated the gdata plugin, set up a unique google account, set up a special folder on google drive, created a sheet and added titles, all lower case, and all match the db names. Then I did the authorization thing and pasted the result into the small panel that comes up when you first activate for a sheet and pasted that authorization. 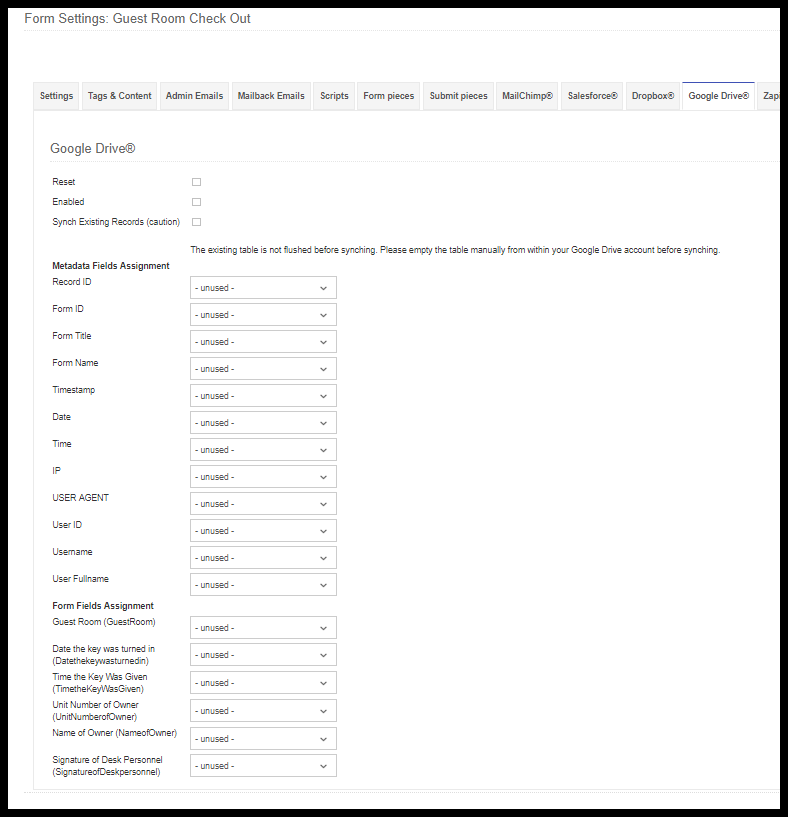 But nothing happens. I get a list of fields in my form (advanced settings) and all the dropdowns sho, "not used". I was never given a screen that asked which sheet should be used and nothing I did caused any data to go to the google sheet.

I don't see where I have done anything wrong. I've attached a screenshot of the result.

I also don't see a way of canceling what I had done so far so that I could try again, it appears that once you try to set up an integration with google, then you are stuck with what you have done up to that point. How can I reverse and start over?
Attachments:

I will ask just to check. So after you pasted the authorization ccode into the small panel that comes up and passed that authorization you didn't see the list of available spreadsheets like in the picture below?

Please do as follows as it might solve your issue:

1) Navigate to to Joomla > Extensions > Plugins, search for gdata and disable the BreezingForms - AddOns - GData plugin.

2) Go to Joomla > Extensions > Plugins > Upload package file and upload the latest gdata plugin zip package that I'm sending you as an attachment.

3) Try to connect your Form to Google spreadsheet once again.

Let me know if after you do this something changes.

Thanks. With your advice, I was able to make a connection with google sheet(s) hosted on google drive. I had my google account so screwed up that I had to delete it and start over but couldn't have done it without your input! Thanks again, Mike

ps. I haven't found anything that I needed BreezingForms Pro to do that I couldn't ultimately make it do. Great product.

I'm glad that you have managed to get it to work.

Thank you for the kind words, I'm really glad that you like our product and hope you'll continue enjoying using BreezingForms.

After several months of problem-free operation, I am now having a problem with the GData plugin.

All of a sudden Breezing Forms stopped communicating with Google Drive. When I looked into it, I found that the Google Drive connection needed to be setup again which I find odd...

So from the Google Drive screen in BF, I clicked on the link to sign in to Google, generated a new auth code, came back to paste it into the box for that but it wouldn't take the auth code. I tried several times and eventually I came across this error:

Best I can tell, it looks like the communication between Breezing Forms and Google Drive was severed as far back as the 12th of August.

I also see that plenty of other people here are experiencing the same problem so I'm sure you are working on it. Please just let me know as soon as you come up with a solution. Thanks

yes, we have a problem with communication with Google drive and we currently working on it, when it will be done we will notify you here.